U13 Girls Last Game of the Season 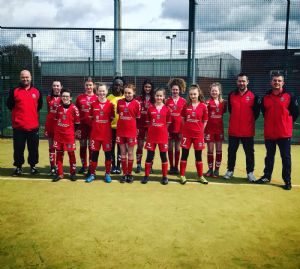 The girls played their final game of the season away at Leigh Genesis on Saturday 28th April.

They knew that a point in their last game of the season, would cement a well deserved 3rd place in their second ever season.

The game started with good possession and pressure from the home team with clever pass and move interchanges. Lily, tracking back well to stop their forward in on goal may have felt the referee may had given a penalty when the pair challenged each other and the forward falling to the floor. The referee was satisfied the challenge was fair- VAR would also have confirmed the decision was correct if it had been asked for. Rhiannon had a ball smash in her face and typically remained tough and soldiered on.

Comments from the home team about our toughness (or words to that effect!) was music to the ears of Manager Steve.

The half ended more evenly with Reddish pressuring and forcing a number of corners. 0-0 it was.

The 2nd half started as the first one did however Leigh needed to be secure at the back as our midfield players were ready to pounce on any loose ball and head toward goal.

Amber had the ball smashed into her face as well and, after getting up, she once again epitomised the toughness of the team.

A couple of minutes before the end of the game Jo pulled off a quite stupendous save when their forward was in on goal, shooting hard and high, Jo dived and tipped it over the bar – huge applause from both home and away fans was truly deserved, as was the award of man of the match.

Fantastic season, fantastic effort and attitude. Each one is a credit to you all.

Special thanks to Venessa and Pete at Commercial & Pool Diving Solutions who have sponsored the team.